July 8, 2020 – TheNewswire – London, Ontario – Goldseek Resources Inc. (CSE:GSK) (CNSX:GSK.CN) (“Goldseek” or the “Company”) is pleased to announce that the Phase 1 program has been successfully completed on its Bonanza property, in the Urban-Barry Gold camp.

Goldseek’s President & CEO Jon Deluce states, “With the Phase 1 till and boulder sampling completed, we will continue the review of the Property while we await results. We look forward to receiving the results back as we believe it will outline significant targets along our 15km conductive trend.”

The main target on the Property is a 15km long iron formation that is locally conductive, as shown in Figure 1 below. That iron formation is the main exploration target due to the presence of two boulders located right on the iron formation, on the neighboring property owned by Osisko Mining. The boulders are described as being brecciated pyrrhotitic iron formation with recemented pyrite and chalcopyrite. The boulders graded 9.2 g/t Au + 1.8% Cu (sample K-93-62) and 6.2 g/t Au + 0.85% Cu (K-92-53). Multiple features indicate that the boulders would most likely originate from a local source:

Figure 1: Targets on the Property 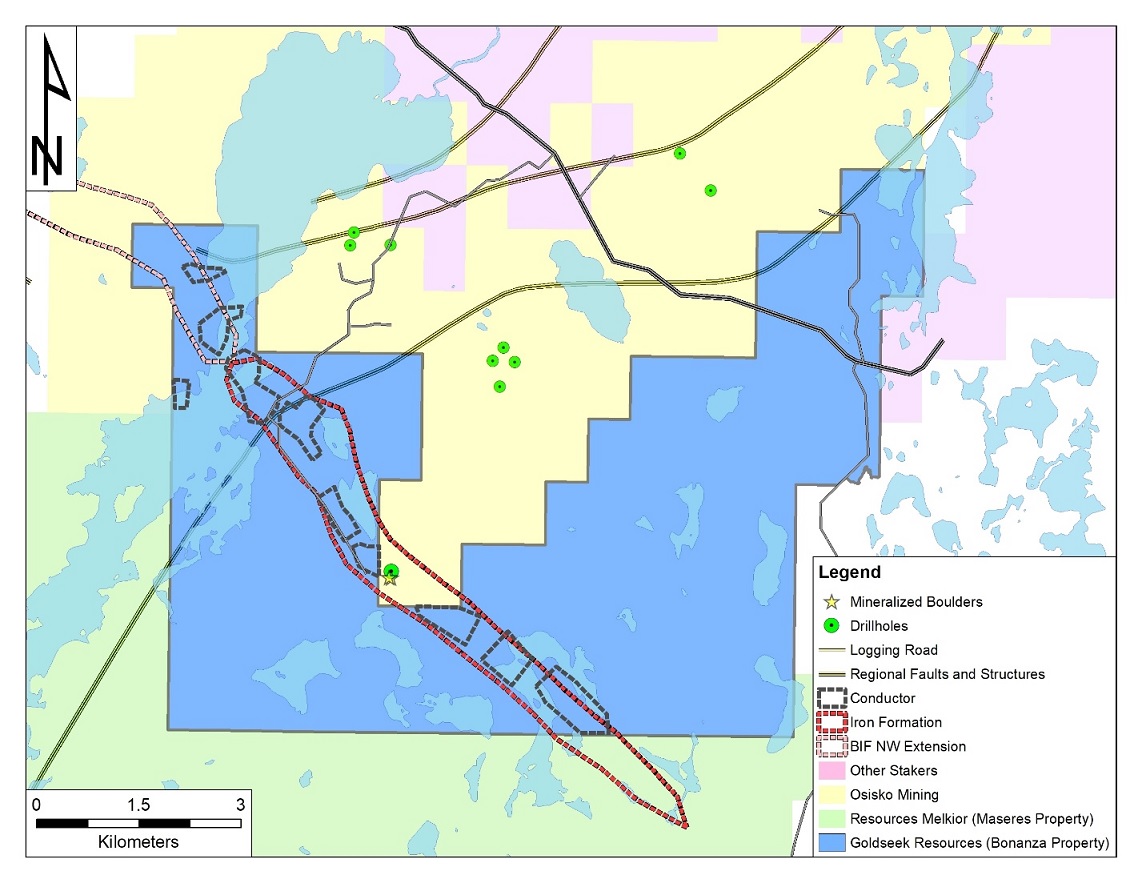 These findings indicate the source of the boulders is the iron formation, which the Company owns 15km of along strike. They also explain the potential of the iron formation and the possible mineralization it can host. Additionally, data from the airborne survey reported 4 cross-cutting magnetic structures on the main conductor (Dube, 2018), and multiple additional conductors. The NW area of the Property is also expected to host the Maseres, the Barry, and possibly the Rouleau faults. These are spatially related to gold mineralization in the Urban-Barry greenstone belt.

A total of 750 soil samples were planned in the first phase of work. Overall, a total of 524 soil samples were taken. The balance of the samples was either planned for a location that had no till at surface or till that was located along trails that required clean-up. The access clean-up will be performed while the Company is awaiting results.

The Company also performed a boulder sampling survey during the exploration work, and a total of 11 boulders and 10 outcrops were assayed. Boulders were rare at the surface, and the Company believes that focusing on boulder sampling during the trenching survey (once results are known) will increase the likelihood of finding mineralized boulders in the areas of interest.

The soil samples were sent to ALS Laboratory in Val d’Or the AuME-TL44 assaying protocol, which consists of assaying of Au and 46 other elements by aqua regia extraction with ICP-MS finish on a 50 grams sample. Finally, the results will be statistically analyzed to define anomalous thresholds, which will allow the Company to identify anomalies and subsequent exploration targets.

This press release was prepared by Steven Lauzier, P.Geo,OGQ who is a qualified person as defined under National Instrument 43-101, and has reviewed and approved the geological information provided in this news release.

Goldseek Resources Inc. is a Canadian exploration company with a portfolio of assets in Ontario and Quebec, Canada. By identifying four projects in world-class mining locations, Goldseek is poised to deliver shareholder value through rigorous exploration and development on these properties. Our mission is to find the next major discovery in the mining camps of Urban Barry, Quevillon, and Detour Gold Trend in Quebec and Hemlo in Ontario.