September 16, 2020 – TheNewswire – London, Ontario – Goldseek Resources Inc. (CSE:GSK) (CNSX:GSK.CN) (“Goldseek” or the “Company”) is pleased to announce that the previously completed soil survey (see news release dated July 8th, 2020) defined 3 targets on the Bonanza Property. Two of those areas will be investigated using an IP survey before the hunting season. Following the IP results, a trenching program will be performed on the top priority near-surface areas. In parallel with the IP survey, a prospecting program will be completed to define the source of the anomaly better. This information will be used to plan a trenching survey, followed by a drill program to be completed before the end of 2020. 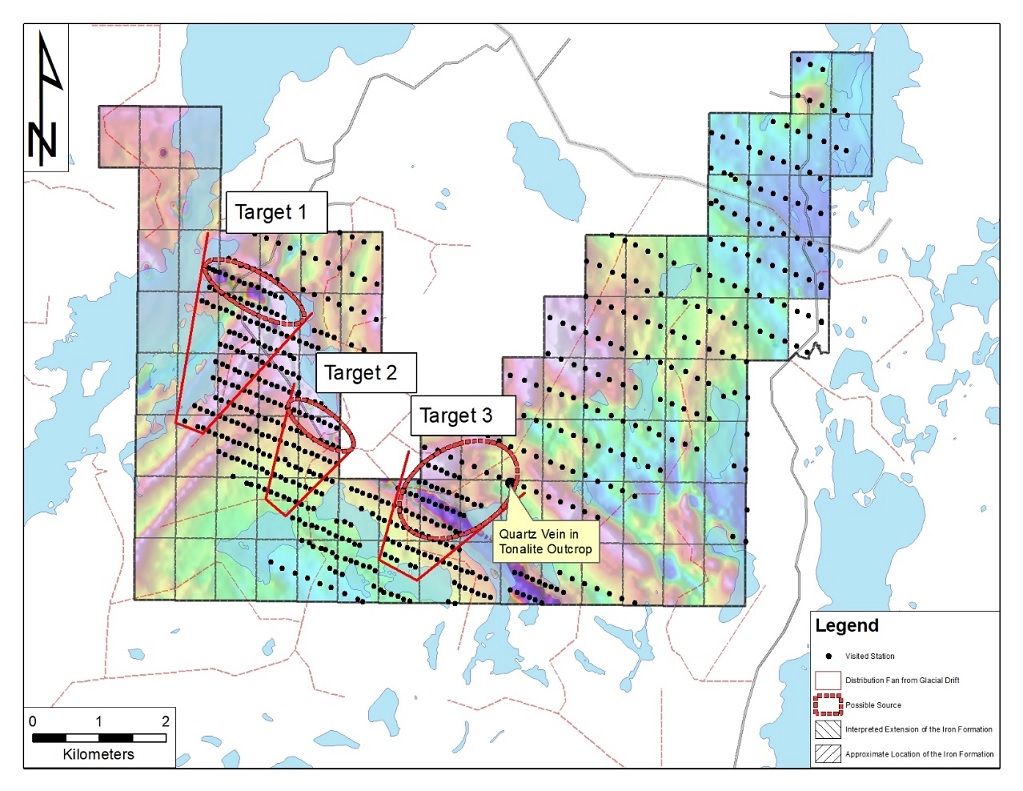 Goldseek’s President & CEO Jon Deluce states, “With the completion of Phase 1 we are well on our way to executing our 3-phase plan within budget and on time. With these strong soil returns highlighting Targets 1-3 on the 15km iron formation trend, we look forward to our maiden drill program this winter. For our next phase, we will be completing IP and Stripping/Sampling programs, which will commence shortly. This will continue to develop and bring attention to the Bonanza project in Quebec’s next major gold camp with 8.5M oz of resources discovered to date.”

Anomalous elements of each target is summarized in the table below:

Table 1. Anomalous elements on the 3 targets.

An IP survey is currently beginning on targets 1 and 2 and should further define the conductors associated with the soil anomalies. This will define a more limited area of investigation for trenching and drilling of a mineralized source.

Additional soil anomalies in the center area of the Property, next to a high magnetic anomaly, were also found and will be followed up with prospecting and boulder sampling. Those anomalies are located near an outcrop quartz vein in tonalite that assayed anomalous values of 13 ppb Au, 1.77ppm Ag associated with 53.7ppm Bi, 3.3 ppm Mo, 2.82 ppm Nb and 1.03 ppm Te. This tonalite may also be associated with Target 3.

Anomalies for the assayed elements were defined by 2 (95%) and 3 sigmas (99%) for Au and Ag while 3 sigmas (99%) only was used for the other elements. The anomalous thresholds are defined in the table below.

Laboratory duplicates appear to be within 10% tolerance, except one sample which returned 106 ppb Au and 1ppb Au (the lowest value was retained for the official result) and could be associated to a nugget effect.

An internal QAQC program was conducted on the property and consisted of 28 samples composed of homogenous sand found in a sandpit on the Property. Only two blank samples returned values greater than 2ppb Au (with detection values of 1ppb). For other elements, the values fall within 10% of each other.

Appointment of Steven Lauzier as Vice-President, Exploration for Quebec

Steven Lauzier operates a consulting company named SL Exploration Inc since 2010, which provides services to the exploration companies of Quebec. Over the years, the Company developed a specialization in soil sampling and is associated with multiple recent soil discoveries in James Bay and the Abitibi area. Steven is also well versed in claim management, stakeholder relations (citizens, municipalities, MRC, first nations, CPTAQ, and land owners), and the permitting process of the different Quebec ministries related to mineral exploration and project development. Multiple years ago, using his financing and geological knowledge, he was generating properties and exploration targets that were sold to other parties.

Goldseek’s President & CEO Jon Deluce states, “It has been a pleasure working with Steven over the past two years in a consulting role for Goldseek, and I am confident with his leadership we will make a discovery in our Quebec portfolio of assets. We will continue to review opportunities to expand our Quebec projects to benefit from the developing gold bull market and the province being a sought-after place to explore.

Quebec being in a glaciated zone, soil sampling will key to exploring our current and future properties in Quebec. The expertise of Steven’s team will allow us to develop systematic surveying of properties to determine their potential in a quick and cost-effective with the goal of leading to discoveries. His general knowledge of the exploration and permitting side of the operations will also allow the Company to fulfill its engagement toward the communities.”

This press release was prepared by Steven Lauzier, VP Exploration for Quebec, P.Geo,OGQ and by Pierre-Alexandre Pelletier, P.geo OGQ, who are qualified persons as defined under National Instrument 43-101, and who reviewed and approved the geological information provided in this news release.

Goldseek Resources Inc. is a Canadian exploration company with a portfolio of assets in Ontario and Quebec, Canada. By identifying four projects in world-class mining locations, Goldseek is poised to deliver shareholder value through rigorous exploration and development on these properties. Our mission is to find the next major discovery in the mining camps of Urban Barry, Quevillon, and Detour Gold Trend in Quebec and Hemlo in Ontario.

Previous Post
Goldseek Commences Maiden Drill Program at Horizon (Hemlo) and Property Addition
Next Post
Goldseek Resources Intersects Base Metal Mineralization on its Horizon Property North of Hemlo
Menu
This website uses cookies to improve your experience. If you continue to use this site, you agree with it.
Ok