Goldseek’s President & CEO Jon Deluce states, “We are very excited to announce the aquisition of the Beschefer Project. Beschefer will be our flagship project going forward which I believe is a great addition to help derisk our current strong grassroots portfolio. We believe this project has significant near-term resource potential and we will announce our exploration plans for 2021 shortly with our medium-term goal of a maiden resource estimate in 2022.”

The Beschefer Project covers approximately 962 acres and is located in the Northern Abitibi Greenstone Belt, 14 km east of the past-producing polymetallic Selbaie Mine, 45 km northeast of the Casa Berardi Mine and 30 kilometres from Wallbridge’s Fenelon Gold property. Historically, the area has mainly been explored for volcanogenic massive sulfide deposits similar to the Matagami camp and the Selbaie Mine.

Gold mineralization was discovered in the B-14 Zone in 1995 by Billiton Canada Inc. and the Beschefer Project saw very limited exploration before the involvement by Excellon in 2011, which completed approximately 17,000 metres of drilling up to 2013. There has been limited exploration at Beschefer since 2013 with the exception of 1,600 meters drilled by Wallbridge in 2018.

A summary of historic drill hole results is reported in the table and also shown on the Figures below. 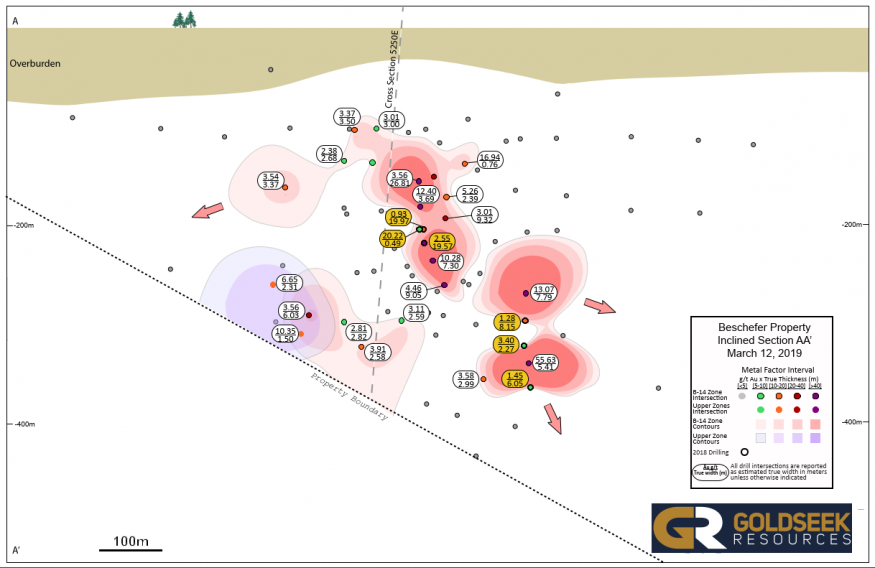 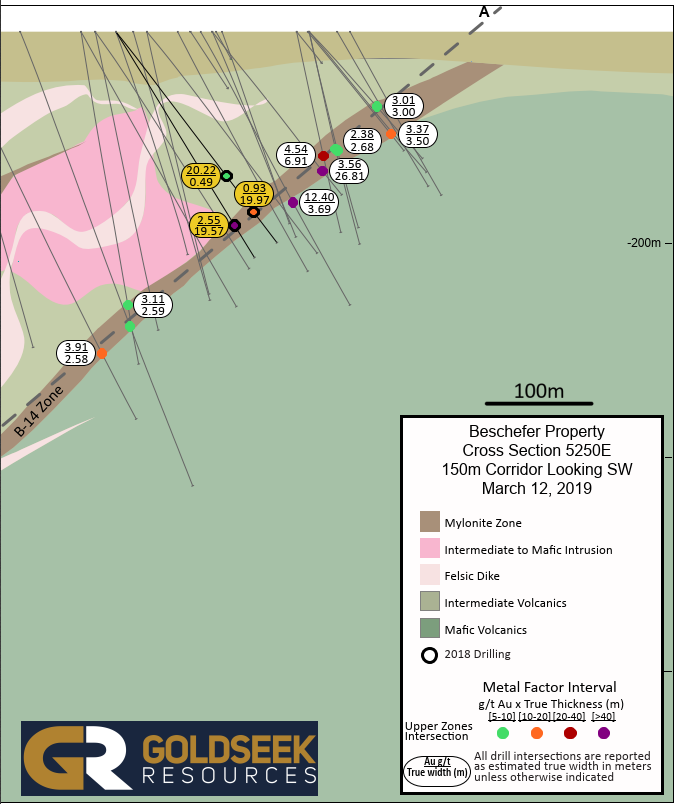 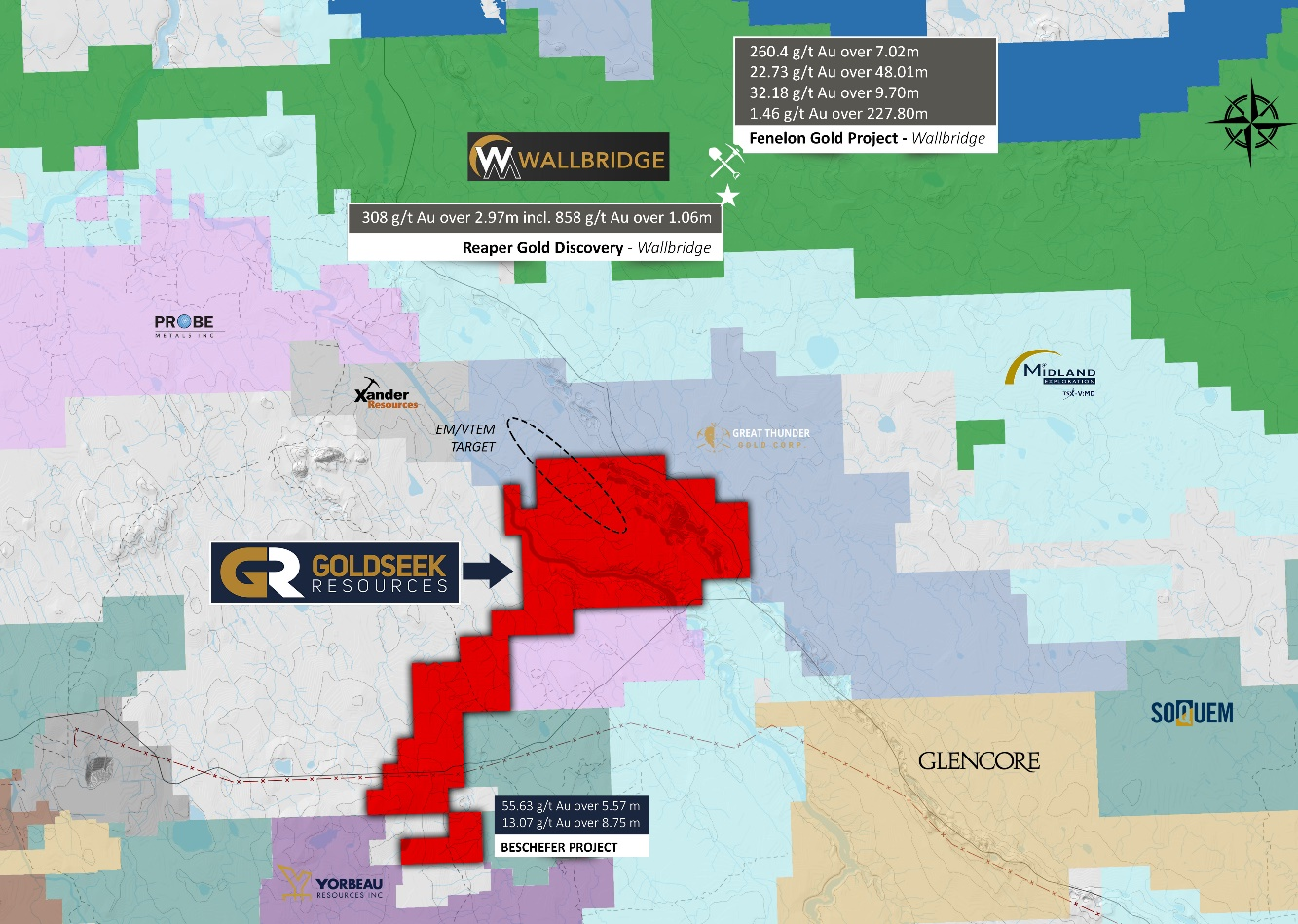 The Option to acquire Beschefer (the “Option”) may be exercised by the Company by incurring and funding aggregate exploration expenditures on the project (“Expenditures”) in the following amounts and issuing common shares in the capital of the Company (“Common Shares”) to Wallbridge over a four-year period, as follows:

The Company may accelerate Expenditures and the Option will be effectively exercised when the Company has funded and incurred Expenditures which total C$3,000,000 and issued to Wallbridge 4,283,672 Common Shares.  The Option and the issuance of the Common Shares is subject to the Company’s filing requirements with the Canadian Securities Exchange.

This press release was prepared by Steven Lauzier, VP Exploration for Quebec, P.Geo,OGQ, who is a qualified persons as defined under National Instrument 43-101, and who has reviewed and approved the geological information provided in this news release.

References to nearby projects such as the Casa Berardi Mine and Fenelon Gold project, are for informational purposes only and there are no assurances that the Company will receive the same results at Beschefer.

This news release contains certain statements that may be deemed “forward-looking statements” with respect to the Company within the meaning of applicable securities laws, including statements with respect to the Company’s future plans and the acquisition of Beschefer. Forward-looking statements are statements that are not historical facts and are generally, but not always, identified by the words “expects”, “plans”, “anticipates”, “believes”, “intends”, “estimates”, “projects”, “potential” and similar expressions, or that events or conditions “will”, “would”, “may”, “could” or “should” occur. Although the Company believes the expectations expressed in such forward-looking statements are based on reasonable assumptions, such statements are not guarantees of future performance, are subject to risks and uncertainties, and actual results or realities may differ materially from those in the forward-looking statements. Such material risks and uncertainties include, but are not limited to, the Company’s ability to obtain all requisite approvals, including approval of the Canadian Securities Exchange and securities regulatory authorities, if required for a transaction or financing, the Company’s ability to raise sufficient capital to fund its obligations under its property agreements going forward, to maintain its mineral tenures and concessions in good standing, to explore and develop Beschefer or its other projects and for general working capital purposes, changes in economic conditions or financial markets, the inherent hazards associates with mineral exploration, changes in general economic conditions, the ability of the Company to obtain the necessary permits and consents required to explore, drill and develop its projects and if obtained, to obtain such permits and consents in a timely fashion relative to the Company’s plans and business objectives for the projects, changes in environmental and other laws or regulations that could have an impact on the Company’s operations, compliance with environmental laws and regulations, aboriginal title claims and rights to consultation and accommodation, dependence on key management personnel and general competition in the mining industry. Forward-looking statements are based on the reasonable beliefs, estimates and opinions of the Company’s management on the date the statements are made. Except as required by law, the Company undertakes no obligation to update these forward-looking statements in the event that management’s beliefs, estimates or opinions, or other factors, should change.