The Company has started the program with 5 holes in the Central Shallow and Deep Zones with the objective of developing further continuity in the geometry and grade of the modelled lens. Drilling has targeted areas where high metal factors were historically intercepted associated with strong feldspathic alteration hosting different forms of disseminated pyrite.

An overview of each hole’s objective is summarized below:

Goldseek’s President & CEO Jon Deluce states, “We are excited to finish drilling our 5 planned holes in the Central Shallow and Deep Zones. These Zones have the potential to deliver strong metal factor intercepts, so we are optimistic about the prospects of our infill and expansion holes planned. We look forward to providing a visual observation update once the logging is complete.”

As shown in Figure 1, the Central Shallow Zone has been modelled over 200 to 250 metres of strike length and extends over 300 metres of vertical depth. Intercepts with metal factors (g/t X metres) between 30 and 140 form shoots inside the lens whose geometry remains to be tested and expanded. 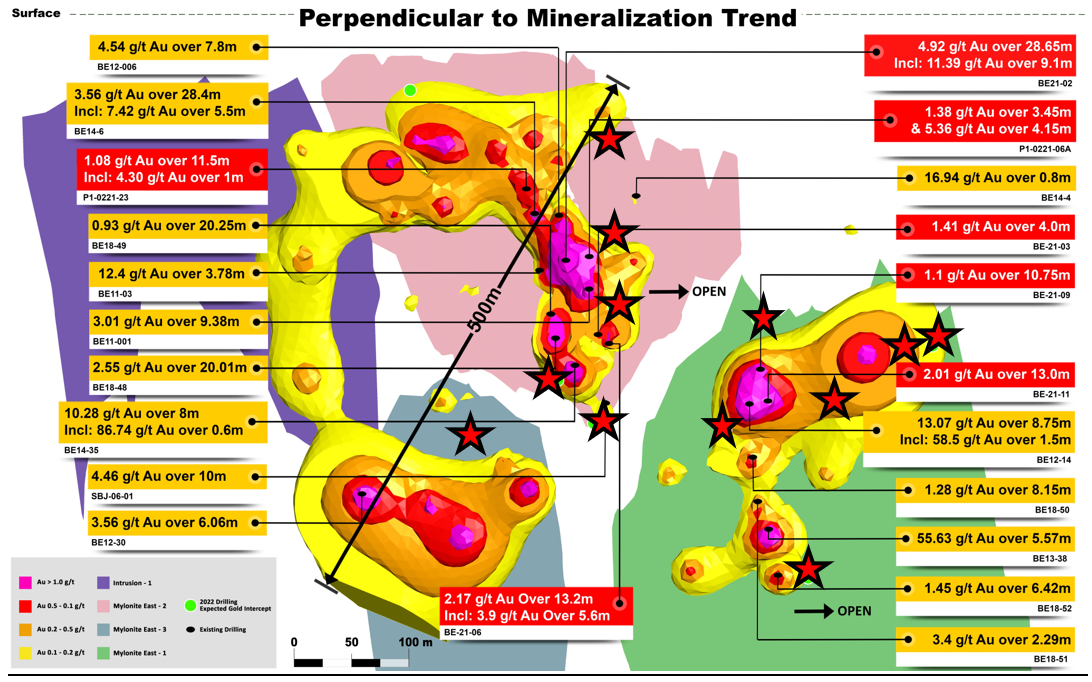 This news release contains certain statements that may be deemed “forward-looking statements” with respect to the Company within the meaning of applicable securities laws, including statements with respect to the Company’s future plans of Beschefer. Forward-looking statements are statements that are not historical facts and are generally, but not always, identified by the words “targets”, “expects”, “plans”, “anticipates”, “believes”, “intends”, “estimates”, “projects”, “potential” and similar expressions, or that events or conditions “will”, “would”, “may”, “could” or “should” occur. Although the Company believes the expectations expressed in such forward-looking statements are based on reasonable assumptions, such statements are not guarantees of future performance, are subject to risks and uncertainties, and actual results or realities may differ materially from those in the forward-looking statements. Such material risks and uncertainties include, but are not limited to, the Company’s ability to obtain all requisite approvals, including approval of the Canadian Securities Exchange and securities regulatory authorities, if required for a transaction or financing, the Company’s ability to raise sufficient capital to fund its obligations under its property agreements going forward, to maintain its mineral tenures and concessions in good standing, to explore and develop Beschefer or its other projects and for general working capital purposes, changes in economic conditions or financial markets, the inherent hazards associates with mineral exploration, changes in general economic conditions, the ability of the Company to obtain the necessary permits and consents required to explore, drill and develop its projects and if obtained, to obtain such permits and consents in a timely fashion relative to the Company’s plans and business objectives for the projects, changes in environmental and other laws or regulations that could have an impact on the Company’s operations, compliance with environmental laws and regulations, aboriginal title claims and rights to consultation and accommodation, dependence on key management personnel and general competition in the mining industry. Forward-looking statements are based on the reasonable beliefs, estimates and opinions of the Company’s management on the date the statements are made. Except as required by law, the Company undertakes no obligation to update these forward-looking statements in the event that management’s beliefs, estimates or opinions, or other factors, should change.

Previous Post
Goldseek Commences 4,000m Drill Program At Beschefer Project
Next Post
Goldseek Resources Announces Beschefer Central Drilling Visual Observations
Menu
This website uses cookies to improve your experience. If you continue to use this site, you agree with it.
Ok