April 27, 2021 – TheNewswire – London, Ontario – Goldseek Resources Inc. (CNSX:GSK.CN) (FSE:4KG) (OTC:GSKKF) (“Goldseek” or the “Company”) is pleased to announce the MMI soil survey results from its’ 2020 program at the Horizon (Hemlo) Property. The Company is excited to announce it has identified a 5th target (Target D) on the Property’s south border, which is shared with Barrick Gold’s Hemlo mining lease.

The MMI survey was completed on top of two magnetic anomalies located on Target B, and the newly identified Target D, respectively named the North and South grids (See news release dated July 31st 2020). The assessment of the data indicates that the Au-Cu-(Mo) and Pd areas on the North Grid and the Pb-Zn-Co-(Mo-Ni-Sb) anomaly on the South grid are well defined, sub-circular anomalies with sharp lateral boundaries and are prime targets using the MMI data.  Both anomalies are open laterally and along strike, as shown in Figures 1 and 2 below.

Goldseek’s President & CEO Jon Deluce states, “We are encouraged with the results of our MMI survey and identifying a new target on the Goldseek / Barrick Gold border.  The anomalies are still open, and therefore we will complete a survey this summer to better interpret the results and extend the known anomalies to plan a follow-up drill program.”

Figure 1. Targets on the Property and the MMI survey 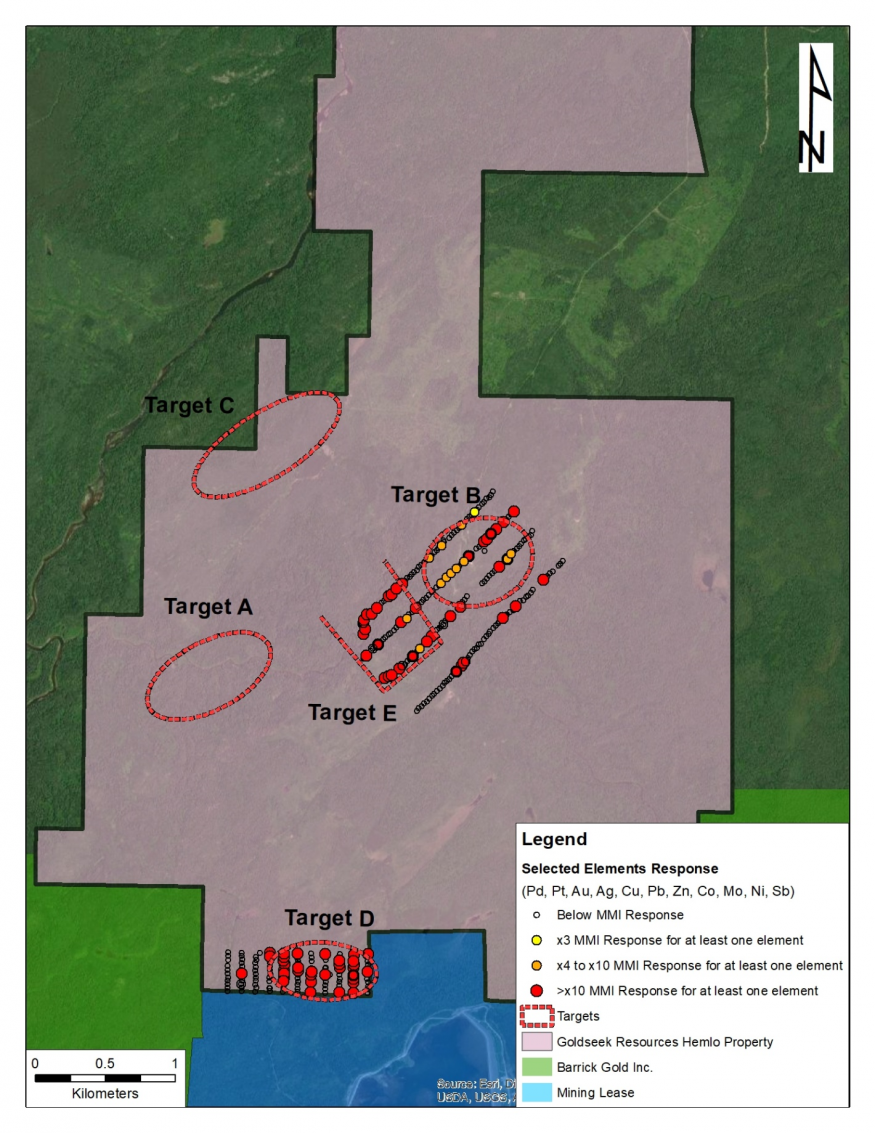 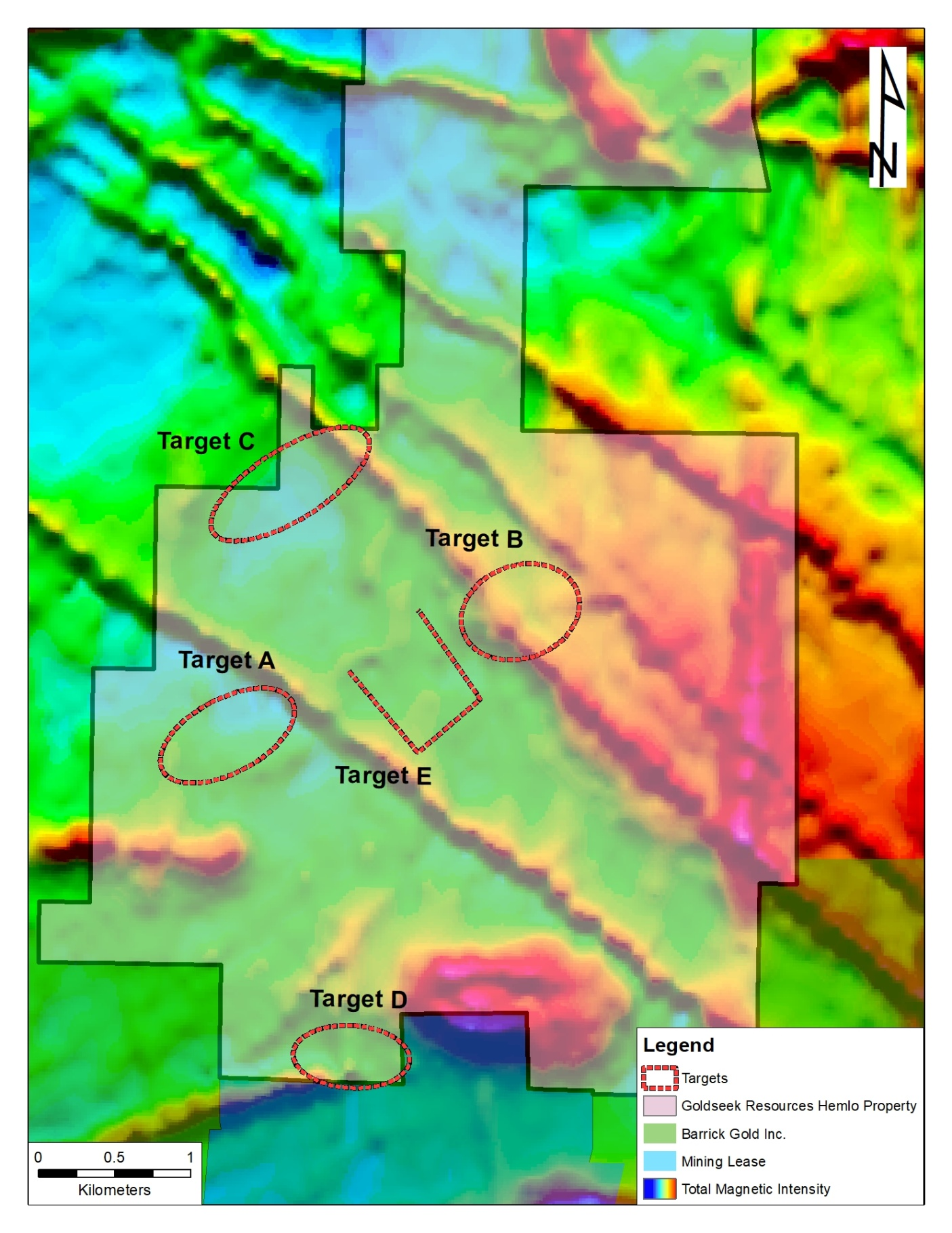 A follow-up survey will be completed this summer to define the extension of the MMI anomalies better since they are still open along strike and laterally.  The general interpretation of MMI anomalies is that the source of the anomalies is expected to be located beneath the anomalies. The basic principle of MMI interpretation is that electrochemical cells are generated around most sulfide bodies as a result of their oxidation by groundwater and are often detectable at surface above the bodies. Oxidation of the sulfides at depth releases a rising column of reduced material. The reduced column shows at the surface as a narrow zone in the vadose zone, with sharp lateral boundaries (from Hamilton et al. 2002). Figure 3 shows the interpreted MMI assay results and targets 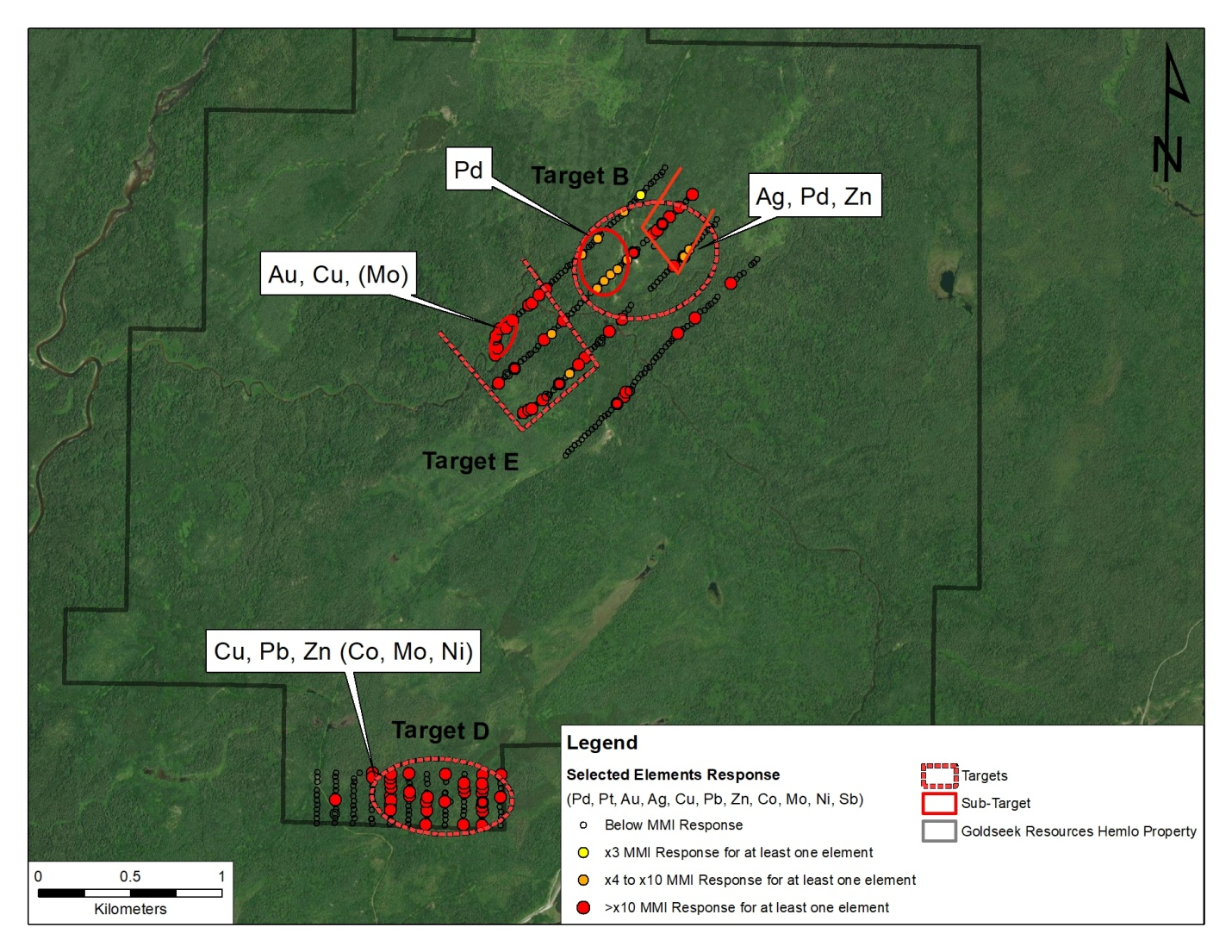 On the North Grid, three areas showed significant clustered anomalies. On the western corner of the grid, on Target E, a very strong and confined Gold-Copper anomaly is present, with minor molybdenum. A circular VTEM anomaly is present on the west side and extends to the middle of the target. Near the center is Target B which consists of a circular Palladium anomaly overlaying a strong VTEM and conductive anomalies. Just northeast is a Silver-Palladium-Zinc anomaly extending over a second VTEM Anomaly and strong conductive anomalies.

On the South Grid, there is a circular anomaly that contains Copper-Lead-Zinc-Cobalt with minor Molybdenum-Nickel. This anomaly is open towards north-east and could be related to an intrusion that is visible on the magnetic map (Figure 4).

This press release was prepared by Steven Lauzier, VP Exploration for Quebec, PGO, and Pierre-Alexandre Pelletier, PGO, who are qualified persons as defined under National Instrument 43-101, and who reviewed and approved the geological information provided in this news release.

Previous Post
Goldseek Resources Defines up to 165 Gold Grains (1,747 ppb Au) in Till at Val-D’or North and Identifies 4 Targets
Next Post
Goldseek Resources Announces 3D Modelling and Next Steps for Beschefer Project
Menu
This website uses cookies to improve your experience. If you continue to use this site, you agree with it.
Ok